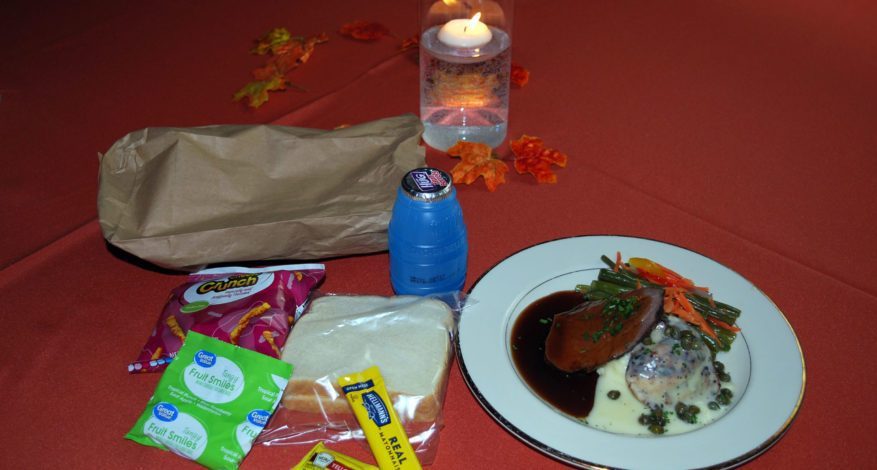 Hunger and homelessness are real issues in the Omaha community – more than 72,000 people in Douglas County are food insecure, and approximately 2,000 people in the Omaha area are homeless. Those attending The Omaha Hunger Experience on November 21 got a firsthand look at the effects hunger has on individuals and families.

Attendees at the sold-out event received a meal ticket indicating whether they would receive a low-cost meal or a gourmet meal. While half were served a sack dinner with either a peanut butter and jelly or cheese sandwich, chips, fruit snacks and a drink, others at their table dined on beef tenderloin, chicken piccata, whipped potatoes, vegetables, salad and a roll.

This dining experience illustrated real-life stories shared by actors performing monologues throughout the evening. Stories of living on PB&J sandwiches, frozen pizza, mac and cheese, or cereal while growing up poor or as adults struggling with hunger.

The Omaha Hunger Experience was presented one week before Thanksgiving by the Stephen Center and Saving Grace Perishable Food Rescue as part of Hunger and Homelessness Awareness Week. “When you sit down to eat with your family in seven days, remember this experience and mention it. We still have a problem in our community,” said Michael J. Murphy, marketing director for the Stephen Center.

“Today we have showed just a slice of hunger disparity in our community,” said Beth Ostdiek Smith, founder, CEO and president of Saving Grace Perishable Food Rescue. She noted the dessert, provided by Nothing Bundt Cakes and served to everyone, was meant to “show that by working together, we can have equal amounts of food.”

Actors from Anastasia Theatre Company and Benson Theatre brought to life stories of those in our community who struggle with hunger and homelessness:

Admission to event was a turkey, ham or monetary donation. One of Saving Grace’s refrigerated trucks was on site outside AIM, which donated the event space, to collect the 26 turkeys, 12 hams and 380 pounds of pork loin that were donated and taken to the Stephen Center.